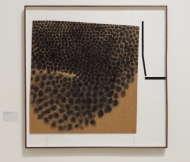 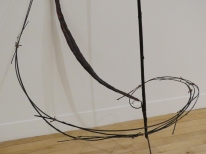 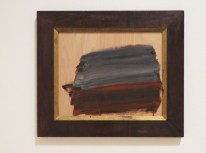 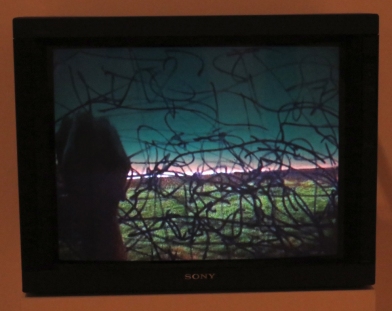 The striking geometric aspect of Pasmore’s Black Abstract is brilliantly balanced with the organic, animal-like pattern – while the placement of the vertical strand resolves the right side dip of the painted panel by topping out level with its left corner – beautifully conceived.
Porlock by Hodgkin strangely mirrors the Pasmore, a central double mark dips in the opposite direction, and on plywood, while the Pasmore painted panel is on chipboard – both materials more closely associated with DIY than fine art – innovative use of materials always interests me. I’ve grown to love Hodgkin’s work over the years, not always a popular choice with defenders of ‘real painting’, yet we know the argument for what is real in painting is treacherous philosophical terrain. For me, Hodgkin diligently subverts the concept of painting while celebrating paint and its effects in the most sumptuous, velvety way – its genius really, the simplest ideas usually are.
In Rachel Lowe’s film, A Letter to an Unknown Person no.2, we watch marker pen doodling on a window of moving transport, could be train or car, with the landscape rushing by – and so both foreground and background rapidly shift throughout. This is perhaps a concept about the attempt to capture a moment in time, yet it’s the aesthetic quality of luminous background and silhouette sketched foreground on the move that kept me glued to the box – the very act of watching the artist draw is compelling in itself.
Flux III feels like a sketch, a light calligraphic stroke, woven organic matter and musical notation – all contrasting with its 3D metal reality – the gestural minimalism of Cluett’s sculpture is quietly magnetic. There is so much great work on display at Tate Britain right now, yet its these four works that left an indelible impression.